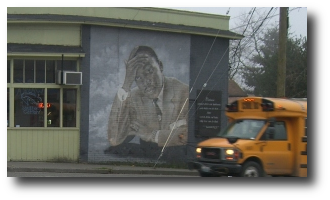 I pass by this mural of MLK almost every day, and I find it incredibly expressive. Maybe it has something to do with the Seattle weather. Today I thought he was looking tired, but hopeful.

Is there some research paper out there to distract me from thinking about politics too much?  How about a networks paper with applications to politics?  An Arxiv paper from the Physics and Society section was updated recently, and it caught my eye with some beautiful pictures. I’ll explain a little, or you can head straight for their figure on the interactions between presidential candidates and corporations.
In Googling hidden interactions: Web search engine based weighted network construction, Lee and co-authors look at complete graphs on politicians, physicists, and baseball players, where each edge is weighted by how many search results Google reported on a query representing both of its endpoints.

(In further defense of the name “maximum 1-out”, as an established alternative to “maximum relatedness subnetwork” (MRS), it would probably be interesting to look at the maximum 2-out in these networks, as well. Good terminology makes research questions easier to come up with.)

Comments Off on Busy Week