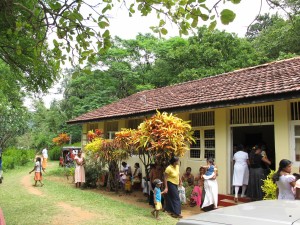 One cool program here at IHME is the field placements for our Post-Bachelors Fellows. This is a roughly 6 week stint during the summer of their second year here where they travel from Seattle to some distant place, to see where the numbers we’ve been crunching come from. Kyle Foreman is in Sri Lanka doing this now, and here is a guest post he’s written about an ICT4D challenge he’s seeing that he wants your ideas on:

I’m spending this summer in Sri Lanka working with the Ministry of Health and the community health department of the University of Peradeniya, observing how Sri Lanka’s medical record keeping and vital statistics system works. They’d like for me to make some suggestions on how it could be improved, so I was hoping to get some feedback on how to make this work.

Here’s the problem: keeping track of something as simple as the number of people who die each year is very difficult here. Patient records are kept at each hospital, then they are tabulated and sent to a regional office, then tabulated at a district office, ad nauseam, until they finally reach the national level. It takes literally years (they just finished the 2006 returns), is full of errors (because they do it all by hand), and is very incomplete (because every step along the way there’s further tabulation which strips away valuable data). They thus have difficulty identifying problems (especially outbreaks), targeting resources, and assessing the outcomes of their efforts. END_OF_DOCUMENT_TOKEN_TO_BE_REPLACED

To take my mind off my meetings, I spent a little time modifying the Spatial Preferred Attachment model from Aiello, Bonato, Cooper, Janssen, and Prałat’s paper A Spatial Web Graph Model with Local Influence Regions so that it changes over time. END_OF_DOCUMENT_TOKEN_TO_BE_REPLACED

I wrote a few months ago about how research in differential privacy seems very applicable to global public health. There is a new report from the Institute of Medicine which calls for a new approach to protecting privacy in health research, Beyond the HIPAA privacy rule. The Lancet also has an editorial about the report, which is what made me think that I should pass this reference on to theoretical privacy researchers. Lancet’s summary: END_OF_DOCUMENT_TOKEN_TO_BE_REPLACED

Have yinz already seen Google Flu? It’s a project by google.org, in collaboration with the Center for Disease Control and Prevention (CDC). It’s been getting healthy press coverage for the last two weeks or so. And, if you want to dig deeper, a draft manuscript on their approach is also available.

The headline result of this approach to tracking flu outbreaks is that it is fast: google.org can observe flu trends two weeks before the CDC. And it is accurate enough, with correlations of 0.85-0.98 between the search-result-based estimate and the gold-standard rates produced by the CDC.

I’ll tell you what’s wrong with it, but first let me praise it.

END_OF_DOCUMENT_TOKEN_TO_BE_REPLACED

A multitude of events in the last week or so have made me want to blog about (and learn more about) the cryptographic theory of privacy. Journalist James Bamford’s new book about the NSA came out, the third in his trilogy. Bamford described his findings on Democracy Now last Tuesday, including how government contractors were hired to eavesdrop on US soldiers in Iraq:

Also last week, (or maybe two weeks ago) the National Academy Press published a new report called Protecting Individual Privacy in the Struggle Against Terrorists. The report’s primary recommendation, that “Programs Should be Evaluated for Effectiveness, Privacy”, is not too revolutionary, but the report contains some interesting summaries of technology and public opinion.

And kicking off this season of privacy discussion, there were demonstrations across the EU on Oct 11 in a world-wide protest against surveillance entitled Freedom not fear.

Or, almost kicking it off… just a few weeks before this tsunami of privacy, Adam Smith posted an interesting sounding paper to the arxiv, Efficient, Differentially Private Point Estimators. This sort of cryptographic approach to privacy is where I’m going with this post. But let me first mention why I’m going there.