Health Economist Jonathan Skinner gave a talk at IHME about a week and a half ago. He told us about his work on the Dartmouth Atlas of Healthcare, and showed us some of the numbers he’s crunched on the variation of Medicare costs by region. He has found this mysterious, 2.5x variation between the cost of care between expensive regions (like Miami) and inexpensive regions (like Seattle). It seems like a great mystery, and I’ve been puzzling over it for a week now. Any theories? I’m partial to network effects. 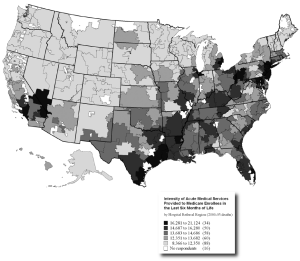 Here’s his paper on the subject.