I’ve been spending a lot of time looking at faces lately. Baby faces, to be specific. Baby faces are just wonderful, especially my baby, if I do say so myself. In fact, that adorable baby, said face, and said staring are making me forget my “blogging” voice. I think I can recover it with a little effort.

There is a face-related visualization technique that I’ve been planning to write about, and this seems like just the moment: recall Chernoff Faces. This 1970s-era method for multidimensional data visualization is so cute that it has been a recurring example in visualization education for 40 years, but it is so hard to use that it is almost never used in practice. Have you seen it before? 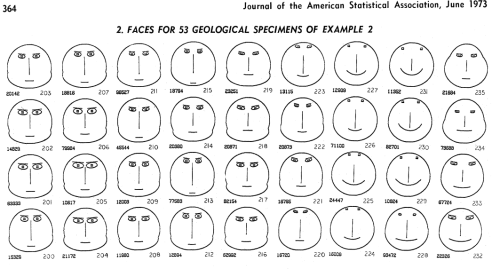 It looks to me like there are three different shaped faces in the above figure. Agree?

This hasn’t always gone so well, though, as an example from a subsequent application by different authors shows below. In the following, do you see anything worth grouping together? I guess they show only a single exemplar from each cluster here, so they’re all supposed to look different. 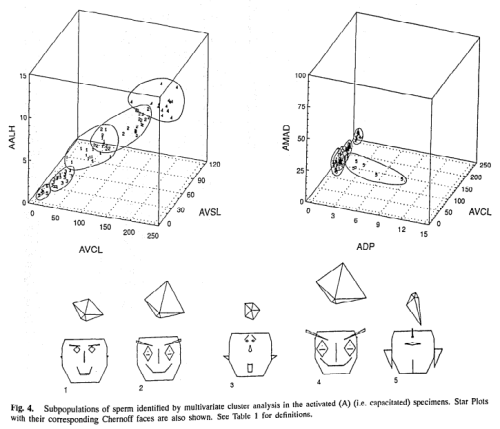 But I’m still excited about for the same reason as everyone else: faces are so cute! I have come up with a related human computation task where it may also be useful: outlier detection.

I’m not the first to want to do this, and it has even been attempt in health service research before: 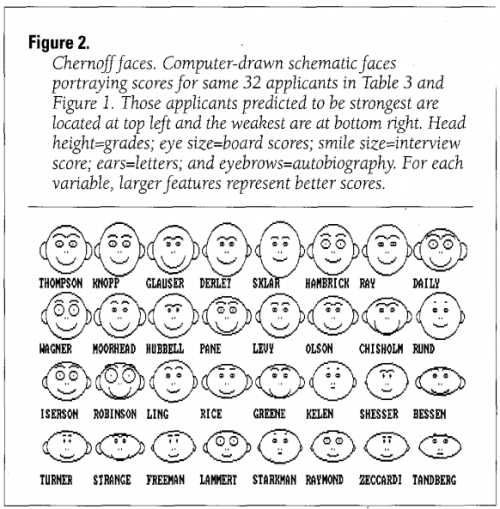 A quick search turns up lots of code for generating faces from multidimensional data, but nothing as cute as Chernoff’s original work. I’ll remedy that in a near future post. Unless you know of something already out there that I missed.